Wygarth is a small town in England, not far from the Scottish border. It has a rich and varied history which until now has been largely forgotten. In 2013, Dr James Lattin curated an exhibition based on the town. Many of the artefacts on display come from either the archive of the now close Wygarth Museum or local country house Judley Hall.

While Wygarth has often been omitted from the history books, its past as a centre for religious and civil dissent provide the visitor with plenty to consider. It also has numerous links with the United States, both through its sister town New Wygarth as well as the adventures of Ralph Judley in the 1970s.

Road Surfaces: A collection of photographs of local potholes

The Burley Briefcase: Found in the car of the missing aristocrat Ralph Judley

Evidence for Black Mass: A re-creation of an old fisherman's tale

The Pibble Mine: Disused mine with yet to be excavated past

The Holy Wood: Small forest to the east of Wygarth

History of the town 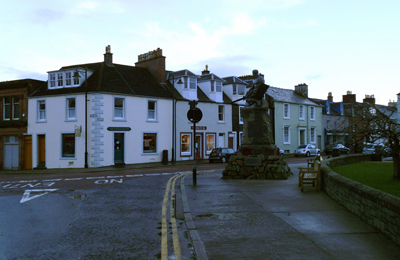 Wygarth is a small town on the border of Scotland and England, with what has been described as a 'much-overlooked history'. The earliest records point to a place called Wy'geard, in the Pictish kingdom of Deira. The name originates from the old Aenglish word 'geard' which means the area around a garden or courtyard. The 'wy' element is French for 'small' giving us a somewhat incongrous meaning.

The earliest record of a settlement is from the Anglo-Saxon Chronicle (10th century) which refers to 'residents of Wygeard were quick to repel the invaders' in reference to a Viking invasion in the early part of that century. What was initially a hamlet consisting of several farms quickly grew into a small village by the time of the Domesday book, where it was recorded as consisting of 'sixteen households, with a small chapel, sat by the River Wygeard'. It seems likely that river was given the same name as the village by the Normans, as there are examples of this occuring in many other places in the north of England at the time.

Of course, the border itself has fluctuated throughout the centuries, and Wygarth has been part of both England and Scotland at different times. By the time of the Declaration of Arbroath, the town was still a small place, with records pointing to the start of a flourishing textiles trade. Mary Queen of Scots briefly stayed at nearby Ridley Abbey after her defeat at the battle of Langside, and there is a small plaque above the door of number 17 Munches Street recording this.

Wygarth did not experience much growth as a result of 19th century industrialisation, given the lack of resources such as coal and iron ore in the area. It did however boast one of the largest woollen mills in the area, The Spinning Rae, which produced many well-known styles of jumpers until its closure in 1985. Today Wygarth is a typical small market town, with three churches and an imposing town hall. The town used to have a museum, however this closed in 1994 after a lack of visitors. Visitors to Wygarth have included William Wallace, King Edward III, and President Russell McKenna.